Looks like something went wrong during installation or automatic configuration.

You might want to check the logs of the main application service which you can find here:

Also check if the PostgreSQL Server is running properly:

Hi @julian.bischof Thanks for reply.

yeah I’m trying to figure out the issue, PostgreSQL connection failed while the server is running, 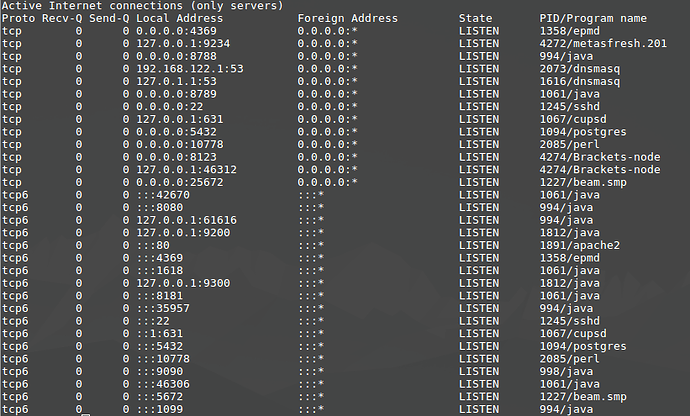 well, I’m not sure if this is the proper way or not but it just works after I added HOSTNAME to /etc/hosts to be,

when accessed http://localhost:8080/serverMonitor the below line were found in tomcat configs,

Is that happens because of meatsfresh_install.sh ? or by PostgreSQL package itself?
I think PostgreSQL connections normally picks localhost only.

Have you checked your config.js? ( http://docs.metasfresh.org/installation_collection/EN/installer_how_to_change_hostnames_for_webui.html )

The hostname in the url has to be resolvable by your client-workstation where the browser is running.

You might also want to checkout the Docker Installation Method.
You can run it on any system supported by docker and docker-compose and a lot of config issues that may occur are not present (due to the way docker containers work) - http://docs.metasfresh.org/installation_collection/EN/How_do_I_setup_the_metasfresh_stack_using_Docker.html

below is config.js links,

well, I install it on notebook to figure out settings and I access it internally for now before I deploy it to VPS,
I’m not fan of docker actually as matters like backup and restore will be more complicated to me.

Is the metasfresh-webui-api service running as well?
And you might want to check the apache2 reverse-proxy if it resolves correctly to the webapi-service.

well, I install it on notebook to figure out settings

We HIGHLY recommend running the server on a dedicated machine or on a VM (like eg. Virtualbox).
Removing the standalone installer with all it’s configs is unfortunately not that easy (one reason we put our main focus on docker these days).

Backups for docker are quite easy: http://docs.metasfresh.org/installation_collection/EN/How_do_I_backup_metasfresh_docker.html

You basically only need to dump your postgresql-database when running a Live Server.

Backing up a non critical docker-installation is even easier:
stop your containers and tarball the whole folder of your container.
Voilá - all backed up.

yeah I understand, on VPS I will proceed with fresh install on fresh system, not by copying files.
well, I will check out docker documents to get ready before heading to VPS installation.

apache config for metasfresh already set for reverse proxy and it should work, Please advise on the above proxy errors, Thanks…

Looks like the service metasfresh-webui-api is not running correctly or is not listening on the port the reverse proxy config expects.

check out /opt/metasfresh/metasfresh-webui-api/log/ for more info.

that’s what I found,

Backups for docker are quite easy

by considering platform upgrades, kindly brief on data migration from version to another under docker deployment of metasfresh, I checked out this link about backup PostgreSQL.

Do I need only the database to restore it with later version? Please advise

sorry, not familiar yet with metasfresh and docker, my concern is to migrate data to upgraded image for metasfresh on later stage.

Usually the IP address is pulled from your primary ethernet adapter (eth0) which on a ideal environment (standalone server/dedicated VM) is assigned statically.
Rough background is that the application needs to connect to itself and also provide autogenerated configs for external clients to access. Which usually is the primary network interface.

Do I need only the database to restore it with later version? Please advise

Generally, yes. You only need the database since all relevant data is stored in there (including some system configs, etc.). Beware though, once an update on a database is performed, you are not able to return to an older version with the same database. So a backup is highly recommended.

How you can generally perform an update is following:

To restore your backup simply:

Of course, there are a lot of optimizations you can do with that and automatic backups and redeploys but this is a general concept of how to perform an update and restore a backup.

well, today I learned much about metasfresh with special thanks for your kind support, appreciated really.

I will examine that different scenarios and see how it works, Thanks again!